Home From Orwell . . . The Theory and Practice of Oligarchal Collectivism 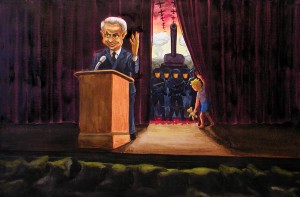 "The aim of the High is to remain where they are. The aim of the Middle is to change places with the High. The aim of the Low, when they have an aim - for it is an abiding characteristic of the Low that they are too much crushed by the drudgery to be more than intermittently conscious of anything outside their daily lives - is to abolish all distinctions and create a society in which all men should be equal.

Thus throughout history a struggle which is the same in its main outlines recurs over and over again. For long period the High seem securely in power, but sooner or later there always comes a moment in which they either lose belief in themselves, or their capacity to govern efficiently, or both. They are then overthrown by the Middle, who enlist the Low on their side by pretending to them that they are fighting for liberty and justice. As soon as they have reached their objective, the Middle thrust the Low back into their old position of servitude, and themselves become the High. Presently a new Middle group splits off from one of the other groups, or both of them, and the struggle begins again. Of the three groups, only the Low are never even temporarily successful in achieving their aims."