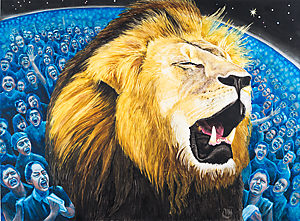 Yesterday I received an exciting phone call that "Requiem for a King" has received the honor of third place award in the July 2017 San Diego Watercolor Society Member Show "Hue Views" jurored by Rikki Reinholz. This painting was also featured in April of this year by Kevin Richardson, A.K.A. the Lion Whisperer of South Africa, as part of his Fan Art Friday Facebook/Instagram posts.

Many of the people who have viewed this painting without knowledge of the background are first captured by the beauty of this magnificent beast, a streak of black through the back of his mane, a mark unique only to this lion. I only need to mention his name, Cecil, and they usually shift from a lighter appreciation of a simple rendering to a deeper emotional connection.

On July, 1, 2015 – two years to the day of the day I submitted this painting to SDWS – an American dentist from Minnesota, Walter James Palmer and local hunting guides lured Cecil, a 13 year old male lion, off the Hwange National Park reserve in Matabeleland North, Zimbabwe. Palmer injured this magnificent animal with a crossbow. He was tracked for 48 hours after which he was shot with handguns, beheaded, and left to rot on the edge of the reserve.

The world mourned that day as did I, almost as much for what humanity has become as for the loss of this powerful king of the savanna. "Requiem for a King" is a tribute to the loss of Cecil and a reminder that we must never forgive and never forget, that we need to rise above this disrespect for life if we have any hope of saving ourselves as a species.

The reception is this Friday July 7th, and look forward to engaging with further conversations about this work with you all. 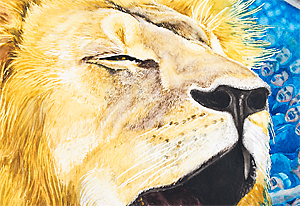 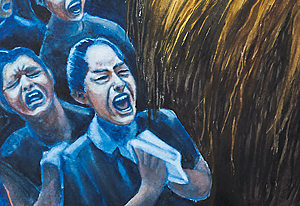